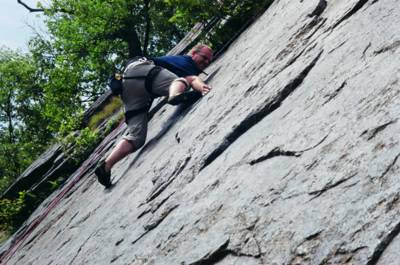 The Day After Thanksgiving

Took Penny climbing today. She had a good day, and it was a much more positive experience than I thought it would be. So all is good there.

As for me, I re-conquered two 5.10's from last week and started working on two more for the future. My hope is to learn the different styles of this grade to help me piece together enough confidence and moves to go up to 5.11.

Wish me luck!
Labels: Climbing 0 comments Links to this post

Today I reached my goal for the entire winter, and this has only been my third time in the gym this year, and third time climbing since the early fall. And I managed back-to-back gems as well, each one was solidly done. I did rest, but not often and was able to work out the moves very well without much hard work.

My first climb today was a warm-up 5.6, which I did consecutively to get warm. I could feel on each of the first two climbs that I was fluid, even though the runs were easy. I decided early on that I was going to go for 5.10 right after warming up. The first was a black-tape run on the back-center wall. It was in a corner and required some tight bridging, sorry stemming, and balance work, but once I got the feel for changing feet using my palms to balance I felt pretty strong. There was one moment, when I was putting a lot of pressure on one hold that was big enough to have both feet, that threw me off balance. Ordinarily, when you change feet you can just hop off one foot and replace it with the other. But some holds are large enough to allow both feet, even if it is just your toes on each edge. It was the second scenario that sent the hold spinning. All I did was adjust my left foot a little to the left and...flooom...pffpfffpfff. I came tumbling down and was unable to find that great position I was previously in.

One important note here, when the hold came flying loose, I looked around to see if there were any employees around so that I could get a tool to tighten it. But there were not, so I scrambled up without it tight. I was able to complete the run, and afterward I went in search of an employee to let them know. The girl I found looked real disappointed when I said that I was not going to go back up, but I showed her the hold anyway.

The next run was a green run on the middle section, in the center of the gym. That had some odd reaches that went around an arrete, and it had a loose hold that also came spinning off under my foot. So this time, instead of finishing the run (mainly because the hold was too loose to use) I asked someone to send a tool up to me. A grateful climber nearby agreed and tossed the tool up...but I missed it. It flew right over my thigh, in-between my abdomen and the wall and crashed right down on some poor girl's head on the other side. Oops. She was not happy. I apologized profusely, but she would not have it. Thank full she did not say anything, after all, it was an accident.

After those runs I was tanked out. Surprisingly because neither 5.10 was pumpy, just technical with small holds. But I was tired and was barely able to make it up a steep 5.9 and then totally crashed on a tricky 5.10 later on. But still, I am back to my previous level, even if the endurance has not returned yet. Can't wait to upgrade that goal to 5.11 by spring!
Labels: Climbing 0 comments Links to this post

With only my second trip to the gym, and second outing since hurting my shoulder in August, I proved to myself that only the stamina had disappeared. Not only did I have a good climb yesterday, but I was climbing solid nines all the way, even getting a successful 9+ in there. In fact, I began to try climbing a ten and eleven. I was unsuccessful, but was able to get on both before being stumped on the third move. And I attempted the eleven at the end of the day, after being totally pumped on a steep, final climb at 5.8. Next week looks to be another opportunity to advance my skills to the next level. Hopefully I am climbing tens confidently by the end of the winter. If only I could get Penny go with me, I would enjoy the climbing much more.
Labels: Climbing 0 comments Links to this post

Hit the Metro Rock Gym Saturday with the hopes of returning to my past glories of scaling tough indoor walls. It was nice to get there because I was able to easily get up a couple of 5.9's right off the bat, but within an hour of climbing I was completely pumped. Not having climbed in two months due to my bum elbow really depleted my energy and endurance. But I was still psyched to get out and go up.

I recently accepted a new job that will have much better hours and a much better pay scale than my current job. This should allow me to get to the gym much more frequently and hopefully get me into the spring in good shape.

I met Katie and her sister Bonnie, who had arrived at 9am to take a three-hour class before me, and we climbed together for a while after their class. But when they were leaving, which was only an hour after I had arrived (and for good reason, they were tired), Katie bumped into another girl named Helen. She had just arrived and was looking for someone to climb with, so that we did. She was a beginner as well, but who cared? All I wanted was a belay and she turned out to be someone who wanted to listen and was willing to try a route until she completed. That was nice to see.

Anyway, hope my climbing group can finally get off its ass and into the gym. Haven't heard anything from them in a while.
Labels: Climbing 0 comments Links to this post

Heading to the gym to climb for the first time on Saturday. Katie confirmed that her sister, and possibly another gentleman, would be along for the class. I can't wait to get back into the gym and try out my moves after a few months of rest. And if I can land a new job that has better winter hours, I will be climbing a lot more often this winter. Care to join me?
Labels: Climbing, Gym 0 comments Links to this post