I almost died on Wednesday. I was climbing with friend on a classic multi-pitch (Recompense 5.9) route at a place called Cathedral Ledge in North Conway, New Hampshire. I was leading the third pitch with two double ropes and had clipped the bottom rope securely into a fixed anchor. I then stuck a cam in a small crack and clipped the top rope and sat back to rest a second before the crux moves (it was a strenuous lieback and my arms were tired from the previous pitch - a tough chimney with a lieback at the end). The crux move would have left me unprotected for about ten feet, so I wanted to get gear in early just in case I fell on the move. I turned around to listen to what my friend was saying to me and when I turned back I saw that the cam had moved. This is how the conversation went after that -

Greg - Did that thing just move?

Friend - hold on a sec while I adjust my hands.

I fell back about five feet toward a slight incline where my friend was belaying from and slid backward toward the edge. There was nothing to grab as the incline was one big sloper. I knew that there was a sharp ledge just before the edge coming up and I braced myself to grab the ledge as I went over. But just as I go to the edge, my friend caught me. He had a real bad rope burn on his finger because in the initial confusion, his hand was off the bottom rope completely and he grabbed the bottom rope from ABOVE the belay device (as opposed to below where the brake hand goes). If he hadn't caught me then I would have tumbled about 150 feet until the rope ran out of length. I don't think that I would have decked out because we were about 200 feet off the ground. But you never know what the impact of that fall could have done to either my insides or to the pro he was secured to in the rock. Anyway, it was a bit of a tense moment. It was only a 15 foot fall, but one that could have been disastrous.

I don't blame him for the accident either. I mean, he should have had control of both ropes at all times, but I could have placed the cam better and clipped both ropes into both pieces of gear because there was no threat of rope drag at that point. Still, it was a lesson to be learned.

Went to Red Rocks the other day with a bunch of friends. We all had a good time climbing and a few friends had their first outdoor leads. I was impressed with everyone wanting to lead. They all sport led it, but that is OK. No one needs to do a trad lead their first time out. I was proud of all of them. Below are some pics... 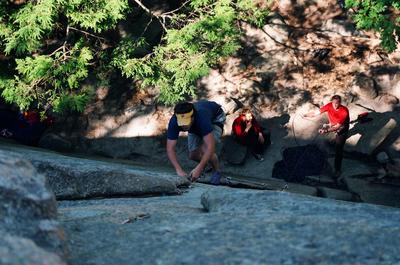 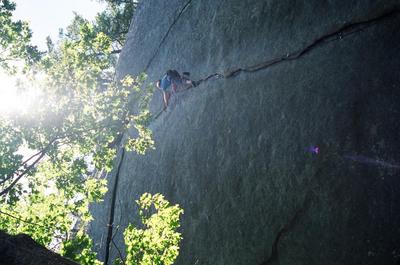 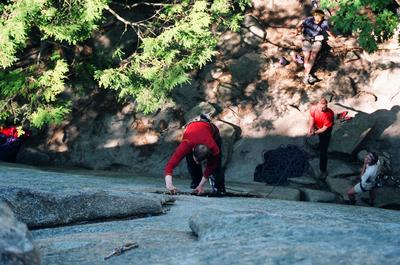 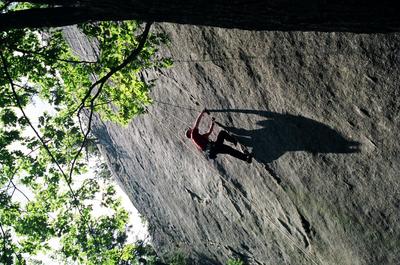 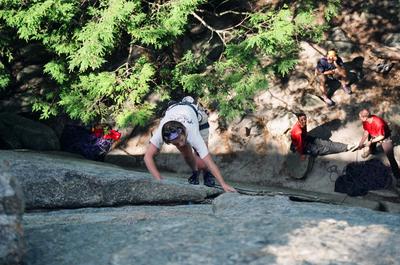 Had one of my worst technical days in a long time. I got a real workout, but really struggled on some pumpy 5.9+, 5.10- and 5.10 routes that I should have been able to nail. Just didn't have the strength after taking a week off. Grrr...
Labels: Climbing, Gym 0 comments Links to this post

What - National Junior Climbing Championships
When - July 1-4, 2005
Where - MetroRock Climbing Gym in Everett, MA
Who - Ages 9-19 years old qualifiers. The winners represent the USA at the World Cup in China in August.
My Role - Judge - my name is actually on there twice!

Check out the results and follow the kids as they go on to the World Cup Competition In Beijing!

Here are just a few photos of the event -

Been reading about climbing fitness lately as I have been attempting to find ways to improve my grade. Honestly, the first problem that I have is my weight (180 lbs at 5'8"). I need to be around 170 lbs to be effective (anything lower than that just does not feel right. I am not convinced that 165 lbs is a good weight for me. I feel too weak at that weight). But I want to lose weight the proper way and find a way to replace the fat with relevant muscle. At the same time, I want to be able to expand my physical capabilities. Going to the gym seemed to hurt my climbing as I regard climbing to be a strength-building exercise. To save money, I quit the gym so that I could focus my strength conditioning on climbing. To get my cardio excercise in I have taken up walking home from work (a 90 minute walk from Kenmore Square to Davis Square in Somerville).

I have been reading this book called - Climbing: Training for Peak Performance by Clyde Soles. This book is fantastic. Not only does he talk about the body, mind, spirit and soul, but also he goes into practical detail by giving examples of the kind of foods you can or should not eat for several cuisines. Very nice. I recommend this book highly. He bases so much on real science and gives options to work out the best approach to each individual's needs and desires. Very well done.
Labels: Injuries 0 comments Links to this post

So I have decided to finally try and enter to climbing community world beyond my little circle of friends. I noticed on Wednesday that Metrorock is going to be hosting the National Adult and Junior Difficulty and Speed climbing competitions over the July 4th weekend. Apparently, the winners will be going to Beijing in August for the World Cup of Climbing competition. Anyway, the sign stated that they were looking for volunteers to work the event either as a judge, belayer or as a roving "miscellaneous" volunteer. I thought to myself, "this sound pretty darn cool," and offered my services to help that weekend.

When I offered, the guy who was helping to set up this weekend's regional competition asked if I had ever judged before. When I told him that I had not he recommended that I come by Saturday to learn how to judge and help belay. That is precisely what I did and really had a good time doing it.

This competition was for all ages up to age 19 and the 14-15 year-olds dominated the routes. I was surprised to learn that the easiest route, the first of three with the second two being leads, began at least at 5.10c or above. That killed any ambition I have for competing. But to watch these kids flash these routes (all were onsited) was simply amazing. I was thoroughly impressed.

I was really surprised, however, by the fact that I felt I was at a Little League game. I mean, except for a few of us, most of the volunteers were the parents of the competitors. I don't know why this surprised me, but I guess it was because the image I have always had in my mind of the climbing community was not one that represented supportive parents. Climbing to me has always seemed to be a bit of a loner sport, where you are really challenging yourself even if you are working with a team or partner. I guess maybe that was so early on in climbing history, though I am sure that many kids become involved through their parents' introduction of the sport, and even those who were not introduced probably had some support. But with the growth of climbing gyms, the safety of climbing and access has allowed for the sport to become more family oriented. I don't think it is unfair to say that there are now "climber" moms out there driving their minivans to and from the gym during the middle of the week. The whole idea is truly bizarre considering the dangerous nature of climbing and the subculture that exists within it (a subculture, by the way, that dominates the image of climbing, at least in my opinion).

Anyway, I had a pretty fun time and met some people that I would like to see and talk to again. I enjoyed this aspect of the climbing community and will likely continue to volunteer at such events. God love life's little surprises.
Labels: Comps 0 comments Links to this post

Well, my goal of climbing 5.11 by this spring has faltered. I am struggling to get up them, and can haul myself move by move if need be, but I am really struggling to maintain the finger strength throughout a route. Still, it is a process and I am climbing better than I was this past fall.

Went to Austin Texas recently for a conference and ended up flying in a day early to do some climbing in the Greenbelt. Jonathan and I scaled a couple of 5.9's and he really struggled up an 11 but was able to piece together the moves. It was a real treat to get outside after such a winter of discontent.

The weather is finally turning here. We have been talking about hitting Hammond Pond, Quincy Quarries or even bouldering at Longwood in the coming weeks. Gotta love the spring time...because it means the warm summer rock is just smooth layback away...
Labels: Climbing 0 comments Links to this post

Frustrating Past Couple of Weeks

For some reason I have really taken a step backward the past few weeks. I was climbing steadily at 5.10 and working toward 5.11, but now it seems that I struggling to get up pumpy 5.9s and fall often on easy 5.10s. My forearms are really suffering on these days. I know that warming up is crucial to my performance, as is strength and endurance building, but I should not be feeling as weak as I am. Going to have to figure this out some how in the next few weeks if I want to get to 5.11 by spring. Ugh, I have my work cut out for me.
Labels: Climbing 0 comments Links to this post