The Start of a Grand Adventure-Day 4, Full Exum Ridge 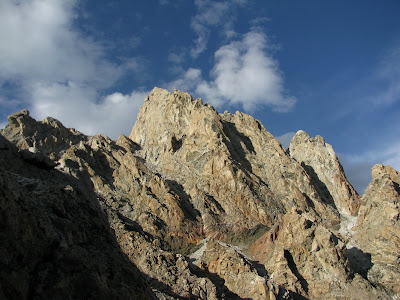 The alarm went off early, too early. I usually don't feel sleepy, but at four in the morning all I could think about was skipping the climbing and taking a rest day. It seemed like "Busterman" was in similar condition and so we lay there for a few minutes before we convinced ourselves to crawl out into the cold morning air. I stepped out into the darkness and couldn't see the stars. That was a bad sign.

The Start of A Grand Adventure Day 3, the Approach From Hell

My "on again, off again" sleep pattern held true until right before my alarm went off. I looked at the watch and it was almost 5:30am. We wanted to get an early start for permits but I wanted to get an even earlier start so I could catch the sunrise on the mountains. So I crawled out of my nylon cocoon and quietly exited the cabin with camera in hand. It wasn't ridiculously cold but I was just sitting in a quiet field, moon at the crest of the mountains, waiting for the sun to rise. I had read the sunrise chart on the caretaker's door the night before and it said 6:55. The ranger's station opened at 7:30 so I figured I'd get a few photos, eat breakfast and be at the ranger's station in plenty of time. I had volunteered to set the alarm and get "Busterman" up since I'd be wake up earlier than him. The sun didn't really rise until almost 7:15, so I was then in a rush to get things going. After waking "Busterman" we hopped in the car, ate some frozen bagels and headed to the Jenny Lake Ranger Station to get our backcountry permits.

The Start of a Grand Adventure - Day 2, The Drive

My eyes blinked open at the white, popcorn ceiling. I reached down and grabbed my phone off the wood floor; it was still half an hour before we'd agreed to wake up and start getting ready. The tiny screen flickered while I surfed the Internet. After checking my e-mail and browsing for a little while, I played some phone games until my bladder forced me to empty it. A little bit later I heard "Busterman's" alarm. I went back to the phone games till he came to make sure I was awake. I had sort of expected we'd be leaving fairly soon so I was surprised when "Busterman's" mom warmed some breakfast burritos for us and we had sort of a slow start.

Eventually though we got on the road. It's a long drive from Loveland to the south entrance of Grand Teton National Park, a little over eight hours. "Busterman" started us off and I fell asleep sometime between Vedauwoo and Rock Springs. Outside of Rock Springs I woke up and searched for my wallet, because it was my turn to pay for gas. I groggily pumped gas as someone pulled in behind us. I watched as they failed to turn off their vehicle and all occupants piled out of the car. I'd finished filling up and got into the driver's side of the car waiting for "Busterman". As I watched the vehicle behind I noted the tall pretty girl who had stepped out of the vehicle. I then watched her lean against the tan SUV and light a cigarette while standing there next to the no smoking sign. "Busterman" opened the door on the passenger side.

- Me: Look at these idiots behind us.
- "Busterman": Hmm, we should leave.
- Me: I agree, I'd hate for us to get blown up before we get a chance to plummet to our death.

It's always interesting how incredibly dumb people can be and how that lack of intelligence may drastically effect the lives of others. I started the car and we were back on the road again. The winding hills blended together as we passed car after car and small town after small town. Eventually we caught a glimpse of the Wind Rivers, with both of us expressing interest in sampling the mountains of another range. Soon after the scenery started to change from sagebrush flatlands to pinyon and juniper forest. The hills became bigger till we were driving through a dark valley. We were so close I started imagining it would be around the next corner but even as we drove into Jackson Hole we had yet to catch a glimpse.

Jackson Hole is a nice tourist town that reminds me a lot of Estes Park only with that distinctly Wyoming flair. Traffic was intolerable as RV's and trailers bumbled through town at a pace suggesting far less urgency than our own. Finally, we were out of Jackson Hole and we still hadn't seen any mountains. Did this place even exist?, I wondered. All of a sudden I saw it, just a short glimpse. I wondered if it was just me wishing for a place that I had yet to actually see but then we drove past another large hill and there it was sticking out stolidly from the landscape. I nudged "Busterman" awake and we both uttered expletives of amazement. 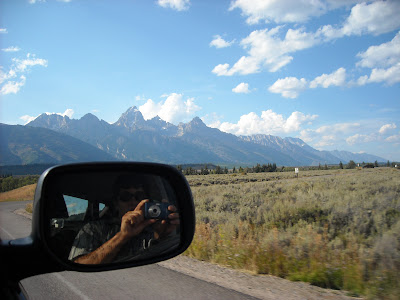 The Teton's really jump out from the landscape. With about seven thousand feet of elevation gain in less than seven miles it's one hell of a stairmaster. By the end of the trip my ass was worthy of GQ. Besides that, there are not really any foothills. One minute you're driving, the next minute their is a huge mountain range staring you in the face. I was a little surprised at how sharp it looked. I'd seen pictures of the Grand and it didn't seem so needle-like, but there it was sticking into the sky, steep and imposing. 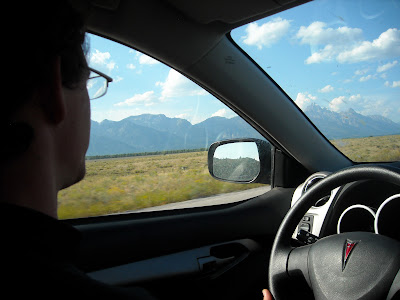 We paid for entrance to the park and quickly headed toward the Jenny Lake Ranger Station. It wasn't quite five and I figured we could maybe get a permit and head up to the Lower Saddle that night. Unfortunately, we found out the permit office closed an hour before so, on the advice of the souvenir shop person, we went to the ranger station at the park entrance to see if we could get a permit there. Don't do this, they cannot issue backcountry permits for the zones in the main Teton climbing areas. After figuring out that the nearest campsites were full we decided to head to the American Alpine Club (AAC) Climber's Ranch. As far as sleeping accommodations went this was our cheapest, closest option.

Rolling into the parking lot we read the sign on the door. The caretaker was climbing and wouldn't be back till later tonight, paying for showers was on the honor system. It didn't say we had to pay for the cabin so we might as well figure that out later. Wandering around the ranch we finally found a cabin. A horrible smelling one, but at least we wouldn't have to stealth camp. After unpacking our camping gear we decided to get the climbing gear together. Gear logistics are always a leap of faith for me. If you leave something behind there's always a chance you'll be sorely missing it at some point. Our rope system for alpine climbing had become pretty standard since our last winter in Rocky Mountain National Park. We climb on one half of a half rope set and drag along a seven mil tag line. Not UIAA approved but it's alpine climbing. The rules of safety are a lot more flexible. We brought a slim rack of cams and a single set of nuts. There'd be no sewing it up this week. When we got to ice and snow gear we had a hard time deciding. We knew there had been snow but we weren't sure how much. There were no major storms in the forecast but the mountains are always unpredictable. In the end we decided against crampons and ice axes because the forecast and info we gathered from other climbers led us to believe we would be able to circumnavigate any ice or snow.

After we sorted the gear we decided to explore for a little while. I gotta say, the AAC Climber's Ranch is pretty cool. People leave their extra food there so we had a nice selection of snacks before dinner while we relaxed in the library, which had a good selection of guidebooks, instructional books, and mountain narratives. There are pay showers, indoor bathrooms, and a nice kitchen area to clean your dishes. If one is still looking for some exercise there's a nice woody on the outside of the bathroom/kitchen building to get a good pump. Given all the accommodations it's relatively cheap, only $20 for non-AAC members.

After exploring a little bit we started making dinner. I'm not gonna lie, I make a pretty damn good meal for something that just gets boiled in a pot. We had southwest chicken with some green beans and quionoa. There were a few other denizens roaming about eating steak with wine. They were all on a guided trip with Exum, one of the local guide services. It was interesting to hear that they all had very different backgrounds and experience levels. After a little more conversation and food we cleaned up our cooking gear and retired to the library where I looked over maps for a little while until I became bored and decided to go to bed. It was only about nine but the moon was coming out bright to light the mountains as I walked to our cabin.

The door slammed into the bunk as I walked into the cabin, and an overpowering odor filled my nostrils. It wasn't the type of odor that comes from climbers. I started trying to find the cause of the odor as it seemed stronger towards the door than anywhere else. I moved the bunks and there it was; a dead mouse. The source identified, I sought a way to get rid of the awful thing. I went outside and found a stick and like a curious child went inside and tried to prod the minute carcass from the floor to it's final resting place outside. I retched a little as I flipped it towards the door. The overpowering odor and the bug crawling out of the small body were a little much. Scary runouts I can generally handle, nasty smells and crawling beetles covered in bloody goo, not so much.

The odor dispatched, I climbed up into my bunk and turned my sleeping bag so my head was far away from the former spot of the dead body. "Busterman" came in soon after. He hadn't really noticed the smell and remained unfazed about the entire dead mouse incident. After deciding to get up with the sun around six I pushed images of the gooey mouse out of my head and tried to sleep. Once again I didn't sleep very well. The moon was intensely bright. So much so that I woke up a few times thinking we'd overslept. That anxiousness combined with my excitement and lingering odor made for a restless night. 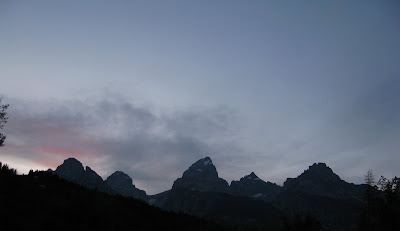