Twelve Days in the Northeast

The most recent trip report is posted here on Climbing.com. I'm no poet, but I took a shot at writing a poem anyway. Because of the way the text wraps around the photos, it doesn't quite look as I submitted it, but that's OK. I really have no clue if it's any good or not. Here is the beginning to give you an idea:

Upon the passing of Hurricane Earl;
he flew in just before
we drove up to Acadia,
to climb the pink granite.
Labels: Acadia, Adirondacks, Cathedral Ledge, Climbing, climbing.com, Gunks, North Conway, Rumney, Whitehorse 0 comments Links to this post 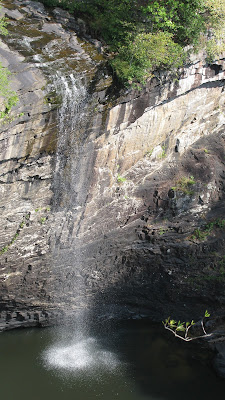 I had grand plans for that day, more accurately, delusions of grandeur. “Fearless Leader” and I headed off to Foster Falls, Chattanooga's sport climbing hub, but I had more than just a few quick draws in my pack. Influenced by John Sherman's article “Its Big, Its Bad, Its Retro-Trad”, I had lugged my entire rack with me. I was going to show sport climbing who was boss, or something like that. I envisioned crowds of awestruck onlookers gawking at my bold prowess. Skipping bolts and sometimes facings serious runouts, I would cruise up the area classics. I had one particular route in mind. Rumor has it that Satisfaction, one of Foster Falls' best routes, used to go safely on natural gear before it got the sport treatment. I had big dreams alright.

It was only a week or so before when I awoke after my first day of climbing after contracting Lyme Disease that getting out of bed was the crux of the day. I rolled my feet to the floor, stood up, and immediately felt as if a truck had hit me head on. My swim session later that day was the slowest I'd had in a couple of weeks, and I wanted to eat the house out of food. I didn't, of course, but if that's how I was going to feel after one day of climbing easy stuff at Rumney then I openly wondered how my trip in September with "Jello" was going to turn out when we would hopefully be climbing every single day for two straight weeks. One day clipping bolts at Rumney clearly wasn't going to do the trick; I needed multiple days in a row of plugging gear, and "Lost", so nicknamed because we got lost trying to find our tent after heading back to the car to fetch the ill-forgotten beer in the backseat, provided me with an opportunity to climb for three days at the old haunt in the 'Gunks. We had been somewhat trying to climb together for a couple of years without luck, so I took the opportunity when it finally emerged and off we went in search of my long-lost endurance.